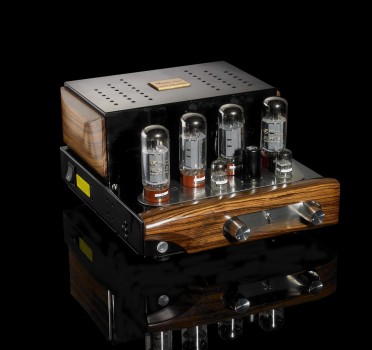 Established in 1996, Yarland is old by Chinese audio manufacturer standards. With 15 years’ experience, it is able to produce a comprehensive range of models in two quaintly-named series: Dreamwork and Yourmate. The FV-34B is part of the Yourmate range. If the unit looks familiar, that’s because it has been – unashamedly – styled in the manner of a Unison Research. Equally, the layout is reminiscent of PrimaLuna and other modern integrated valve amps, the format comprising a shallow control panel below an array of valves, with the transformer housing forming a block behind the tubes. Across the front are the source selector for three inputs, an on/ off toggle and a rotary volume control. The back offers multi-way binding posts for 4 and 8ohm speakers, phono inputs for the line sources and a socket for an IEC mains cable. On the sides are the bias points. The power output valves consist of a quartet of matched Electron Tube EL34Bs, driven by a pair of Beijing 6N3s with a Full Music 12AX7 voltage tube. The unit operates in push-pull, Class A mode, and the power rating is 40W/ch – which is ample for a wide array of loudspeakers.

NICELY DOES IT We’re guessing the unit was run in before it reached us, because it sounded terrific straight out of the box. Hooked up to LS3/5As, the distinctive, textured, often fragile voices of Fred Neil and Tim Buckley on CD reached across the decades with breathtaking realism. We adore the sound of EL34s and the ones supplied exhibited the traits we cherish most about that workhorse. Warmth, which was there in abundance, and an easy grace when not overrun. Here, with the valves asked to produce 20W each, they’re within their safety range, so no clipping was heard – not even when playing live MC5 circa 1968. Hard rock fazed the amp not at all. A burst of Rick Derringer’s ‘Rock’n’Roll Hoochie Koo’ possessed all the might and muscle needed to deliver the sharp crunches, while the speed and quality of the transients was dazzling: taut, controlled. But we were wondering if perhaps the FV-34B amp was too nice? After all, MC5 did not exist to charm: they played to agitate. The Yarland cleaned up a raw, live sound, injecting space and air. With the recently-remastered John Lennon catalogue, and the wilder moments of the Plastic Ono Band, replete with raw fuzz guitar, we were cured of our suspicions. The Yarland was emerging as more neutral and capable than imagined, and any thoughts that the amplifier was polishing the edges were replaced by a knowledge that the amp simply doesn’t misbehave. With works of inimitable refinement – the recent Nat ‘King’ Cole SACDs from Acoustic Sounds – the Yarland proved adept at reproducing the silkiness of Capitol’s 1950s crooner sessions.

VERDICT We had this pegged as a far costlier unit – at least a grand in the light of its build and performance. We were deliriously wrong. The unit sells for so little not just because it’s Chinese, but because you buy it direct. The net result is an amazingly quiet, stable, punchy and musical amp for the price of a decent bottle of Masseto. As an entry to the world of valves, it’s perfect.

Try it with these